skip to main | skip to sidebar

Ahh, Binky, My Old Nemesis. So We Meet Again. 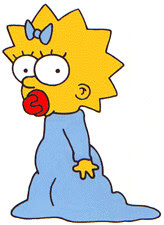 One of my kindergarteners, soon to be a first grader, is unbearably cute. Not cute in the way that you have to pronounce all kids to be when their parent shoves a picture of them under your nose while you're just trying to heat up your Lean goddamn Cuisine. I'm talking the kind of cute where you know people must just stop and gape at him in supermarkets. The kind of cute where, in fifteen years, he will simply look at girls and their pants will fly off.

A couple years ago, he could only speak in vowels. You can imagine what your speech is like without consonants. You sound like you're doing a one man version of the Survivor theme song (ahem, not the clinical term for it). Now he's just about to turn six (six! remember that) and while he still has some speech errors, he's very intelligible, which is huge for him. He's had to work so hard to get to where he is, and I'm just glad it never seemed to affect his confidence.

Still, there's a part of me that could never figure out why the hell it was so hard for him to develop speech normally. I asked his parents, teachers and pediatrician every question under the sun, but everything pointed to a normal developmental history with his speech being the one huge exception.

I met with his parents this morning. First meeting of the day, there with my whole team, but it's mostly my show since he doesn't receive any other therapies. I run through the whole thing: making good progress, here are some things to work on over the summer, any questions?

Mom has one. "You know how you asked us all those questions about the things Kid could be doing at home that could've been hurting his speech?"

I can already tell that this isn't going anywhere good.

"Well, he's been using a binky when he sleeps for years. Could that be a factor?"

We all try very hard to always to be professional with the kids' parents, meaning that we only mock them when we're safely tucked into a corner at happy hour. But I couldn't help my reaction. I put my head in my hands and said, "Oh, no. No, no, no. You're kidding me. Please tell me you're kidding." Our school psychologist later commended me for not turning the table over.

How did I never think to ask if he was still using a goddamn pacifier? How did she not think to tell me after I assaulted her with questions about everything he could be doing with or putting in his mouth throughout the course of his entire day?

Then I read Darren's latest blog entry about seeing a four-year-old with a pacifier and I thought, yeah, it's about time for a public service announcement for parents of young children. Take away the mouth plug. It can profoundly hinder their speech development (and their ability to learn sounds, letters, interact successfully with their peers, need I go on?). Make use of the pacifier fairy, a daily star chart, or a popsicle, whatever works. Just get rid of it.

It's fine for infants, but the old saying holds true: If they can ask for it, THEY'RE TOO OLD FOR IT.

We now return to our regularly scheduled snarkfest.
Posted by Red at Monday, June 18, 2007

Plus if you take it away and leave a longing for some good suckin', they might develop an oral fixation and that can only lead to good things.

My son never had a pacifier. We chose to do other things when he was crying (like hold him), rather than shove something in his mouth. I think it served him well. This is probably completely irrelevant, but he goes to bed at the same time every night, stays in bed, and sleeps all night. His buddies all stay up until 10:00 (10:00?!? They're 3 years old) watching TV, and venture into their parents' bed halfway through the night.

My niece had a pacifier until she was about 3½, and it drove me nuts. If I asked her a question, she removed the pacifier, answered me, and put it back in.

I think the first problem is that it's called a "Binky." That might just be the American in me, however.

I never had a pacifier, but I did suck my thumb until I was 10, and that still gives me problems 20 years later. I don't know what could have been done to make me stop, though.

I'm not trying to be an expert over here, but here's my two cents, for what it's worth...

My son never wanted a pacifier...FANTASTIC!

My daughter had one...when she was about 4 months old, we were at the Doctor's office for her check up and the doctor (total hottie, by the way!!) noticed her sucking on her fingers/thumb. He asked how long she'd been doing that, and I said just a few days. He said that since she had found her fingers and could now SOOTHE HERSELF, there was no more need for the pacifier. Children have the natural instinct to suck, and they need to do that, but according to Dr. Hottie, once they can soothe themselves, they no longer NEED the pacifier. And yes, my daughter sucked her thumb like it was HER JOB after that, but she shook that habit on her own before she turned 2.

I've always hated seeing older kids with a pacifier...now it's even more sad to know the damage they could be causing their children.

One more thing, because I'm thinking this comment is quite long enough...I think your public service announcements work Red, because there are times when after I give my kids a bath that they run off before I put lotion on them...and then I have to chase them down because all I can think of is you saying 'Moisturize your kids people...'...remember that post? I do...and for some reason, if I don't moisturize them, I hear your voice (or your computer voice or whatever) yelling at me to moisturize!!

Agreed. If you can say it, you don't need it.

That rule only applies to kids, of course.

I want to learn more about looking at girls at making their clothes fly off. Can I learn that trick or are you born with it?

Oh, I completely agree. I never had a pacifier as a baby, nor did my brother, and we turned out fine.

Or totally fucked up, depending on who you ask.

Back In The Day